I Was All Wrong

scutterhawk said:
And some were just MORE WRONG.LOL
Click to expand...

And some still continue to be much more wrong. Of course I mean the one you were referring to and not you. 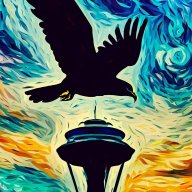 2/10 surprise level - I'm not surprised by the efficient short passing game or his willingness to go to the tight ends. We saw glimpses of that in his backup starts where he was getting the ball out quickly and accurately. I was expecting competent play with a lower ceiling than Russ and a higher floor.

7/10 surprise level - I'm quite surprised by Geno's football IQ and how comfortable he is commanding the offense. Diagnosing defenses, checking to plays that work more often than not, and his overall leadership have all been far better than I was expecting. This is a big factor that most of us were probably overlooking, as 2022 Geno has had a decade of film study since his 2013 season where he appeared poor at this aspect.

10/10 surprise level - I couldn't be more surprised by Geno's accuracy downfield. Geno had perhaps the two best passes of week 6 from any QB with perfect placement on a couple of deep balls. He's not just playing smart and hitting accurate short passes, but he's been making good throws to all parts of the field. He's a top 5 NFL QB right now in terms of ANY/A (adjusted net yards per passing attempt).
You must log in or register to reply here.

EXCELLENT article on our QB and thus draft situation
2 3

D
Our Offense vs. Niners

How Many Seahawks Make The All-Decade Team? My Breakdown