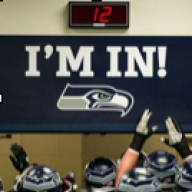 - For a portion of practice, Germain Ifedi moved to right guard, while Isaiah Battle played RT (though Mike Solari described the move as working on an injury contingency). From my own previous observations, Battle moves extremely well but struggles with physciality and finishing blocks; hopefully that is something Solari will help him improve.

-Left tackle George Fant and left guard Rees Odhiambo returned to practice. For now, they are sticking to those positions, but Solari knows it is important to develop flexibility to keep the best available five on the field.

- Shaquem Griffin continues to terrorize Nick Vannett, breaking on a pass for an INT a day after stripping the ball.

- Tre Flowers used his incredible length for a CB to break up a long pass intended for Amara Darboh.

- Tom Johnson got into the backfield for a tackle for loss on a run play; Naz Jones split a double team in pass-rush drills; Jarran Reed showed an impressive power and quickness combination in one-on-one drills; Branden Jackson used his speed to get around a tackle and force a rushed, incomplete pass.

- “On Day 4 [TE Tyrone Swoopes] looked like a potential weapon in the passing game.”

- SS Mo Alexander showed off his strengths against the run. “During 7-on-9 drills, Alexander made back-to-back stops at or near the line of scrimmage, setting the tone for a strong showing by the defense in that portion of practice.”
OP
OP

Doug Baldwin again sat out with a compression wrap on his left leg. There was no official word on his injury as Pete Carroll did not speak to the media Monday. It was the second straight day Baldwin sat out. David Moore also sat out with an undisclosed injury. That had Tyler Lockett, Jaron Brown and Marcus Johnson working with the starting unit at receiver in three-receiver sets. The second receiver grouping was typically Amara Darboh, Keenan Reynolds and Damore’ea Stringfellow. Brandon Marshall remains limited to only individual drills. Once he is cleared for 11-on-11 drills that will obviously change the equation some.

— Fullback Khalid Hill took off his pads and spent the last part of practice on sidelines with a wrap on his shoulder after being injured. Again, it was unclear the specifics of the injury with Carroll not talking on Monday. Hill’s injury left the Seahawks with just one healthy fullback — Tre Madden — as Jalston Fowler also sat out on Monday with an undisclosed injury.

Per Condotta:
“As for Battle, he had some nice moments in the pass rush drills Monday and his size, well, stands out — at 6-7, he is the tallest of Seattle’s offensive lineman. During one drill Battle proved a too-imposing object for a blitzing Shaquem Griffin to get around, with Battle easily standing his ground and giving hand gesture appearing to let Griffin know about it afterward.”

The big thing for Battle will be how he performs in the run game. Also would like to know how he holds up against a bigger pass rusher, like Rasheem Green. As a RT, he will often face bigger strong side edge defenders. Physicality has been an issue for Battle in the recent past.
OP
OP

- Highlights Keenan Reynolds’ work at WR in place of Doug Baldwin. “Beat cornerback Neiko Thorpe off the line in a team drill, turned his head and secured a diving catch over his shoulder from Russell Wilson, providing arguably the play of the day with a 30-yard score.”

- Believes Mo Alexander would start at SS with McDougald playing FS if Earl Thomas continues his holdout into the season. Presumably, that is due to Alexander’s NFL starting experience with the Rams and strengths against the run. Weaknesses for Alexander have been playing in coverage in space.

- “Prosise certainly looked the part on Monday, at one point snagging a catch on a shallow cross from Austin Davis, using a burst to get the corner and cruising 20 more yards into the end zone.”
OP
OP

Solari loves the attitude of right guard D.J. Fluker, whom he coached with the Giants and started at both RG and RT at times due to Giants injuries.

Unfortunately, Fluker has been slowed by nagging injuries during this off-season. Fluker also has extremely slow feet, slow reaction times inside, and was one of the worst pass protectors in football as a RG last season.
OP
OP

Thanks for putting these together hawknation!
You must log in or register to reply here.